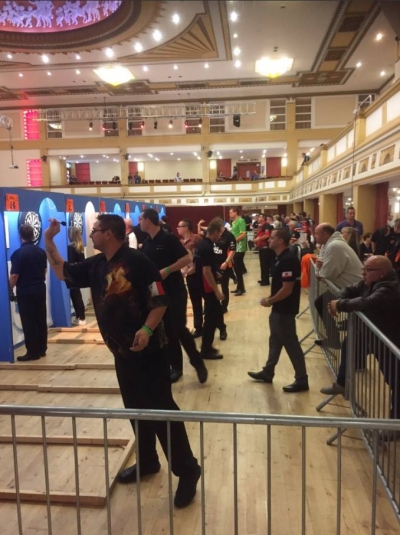 The 44th staging of the BDO Winmau World Masters kicked off today at The Spa, Bridlington and what a day of darts we had. The top 16 seeds were sitting patiently to see who the 16 Board winners would be to join them from the last 32 stage. Big name casualties early doors were Conan Whitehead who had the previous day reached the latter stages of the BDO British Open. Today he came unstuck in the round of 256 to Romanian Adrian Frim who went all the way to winning his board and booking a showdown with a seeded player in the last 32. Martin Adams only lasted one round too, the former three time World Master beaten 3-1 by Joe Chaney.

Former World Champion Ted Hankey was looking to turn back the clock and started brightly in his quest for Masters glory and even had an impressive 3-0 win over Ryan Joyce the current BDO Gold cup Champion, but Ted’s board final proved one match too far and he succumbed to Dutch player Martijn Kleermaker 3-2. Former World Champion Runner-Up Jeff Smith from Canada could only make it to his board semi final where Northern Irelands Gary Tipping proved too strong for Jeff.Other board winners included ‘Silverback’ Tony O’Shea who was thrilled to make it through to the last 32. Wales’ Steve Alker and Scotland’s Alan Soutar also progressed as did Holland’s Yoeri Duijster who beat the experienced Gary Robson 3-1.

So onto the last 32 and the entrance of the top 16 seeds. With the seeded players coming in cold we knew there was the potential of shocks but little did we know what was to unfold. Nine of the sixteen men’s seeds were sent tumbling out of this years Masters, Welsh duo Dean Reynolds and Nick Kenny waved goodbye to their title attempt and perhaps the biggest shock of the round was the defeat of the in form former World Champion Scott Mitchell who bowed out against Tony O’Shea in a close encounter 3-2. Other seeds crashing out included Darryl Fitton, Scott Waites, Jamie Hughes the newly crowned Winmau BDO British Classic Champion and Wesley Harms, whitewashed by Alan Soutar.

The defending Champion Glen Durrant chasing a hat trick of Masters titles sailed through along with Mark McGeeney. The last 16 continues on Tuesday with all the Men’s matches televised on Eurosport and after todays events be sure to tune in because the seven seeds left in know they are in for a battle royal.

The ladies event had their shocks as well with three of the top eight seeded ladies losing out in the last 16. Saturday’s Ladies Britsh Classic Winner Aileen De Graaf was beaten by Tricia Wright, but perhaps the biggest shock was the defeat of World Champion Lisa Ashton who went down 4-2 to Mikuru Suzuki. Fallon Sherrock also had her dreams of title glory ended by England’s Sarah Roberts. New British Open Champion Corrine Hammond moved ominously through to the last 8 along with Deta Hedman and Lorraine Winstanley. The Ladies Quarter Finals continue on Tuesday at The Spa, Bridlington. It promises to be another fascinating day of darts.