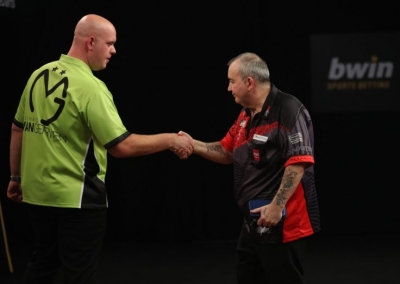 Michael van Gerwen refuelled his rivalry with Phil Taylor by admitting that he called the 16-time world champion a k**b in an angry backstage clash in their semi-final tussle at the Grand Slam of Darts.

‘The Green Machine’ thrashed Taylor 16-8 Sunday’s semi-finals, before going on to defeat world number two Peter Wright 16-12 to clinch his third successive title at the Wolverhampton Civic Hall. However, Van Gerwen’s admission about his fiery clash with Taylor raised plenty of eyebrows.

‘The Power’ had missed an opportunity to reduce the arrears to 11-9 at the interval, but Van Gerwen capitalised with a clinical two-dart combination to move 12-8 ahead. This prompted a trademark fist-pump celebration from ‘Mighty Mike’, but a visibly frustrated Taylor was seen scolding his opponent as he left the stage.

Van Gerwen told Sky Sports’ Stuart Pyke: “He tried a few of his tricks, what he always does. In the break I wasn’t allowed to cheer from my own throw. I don’t know why when I finished a 74. What can I say? Honestly, you want to know honestly? I just walked off, had a little nip of my drink. He came to me: ‘you shouldn’t do this, you shouldn’t do that’.

“I just said ‘you’re a kn*b’ again, that’s exactly what I said. Then he was annoyed at what I said, I don’t know why but something always happens in-between our games, after or before.

“But I also think it’s our rivalries in our games because we don’t want to lose to each other, we try to present our best all the time. Maybe I shouldn’t say it but I still think it was a good game for everyone to watch and that’s what is most important.”

The world number one later told Dutch station RTL7 that the Stoke-on-Trent veteran had pushed him during the interval but claimed: “Well that hurt him, but if he was in front he wouldn’t have looked mean and he would have laughed and done a little dance.”

The pair have been involved in a number of high-profile clashes this year. Taylor had won six of their eight previous meetings prior to Sunday’s tie, and when interviewed after his quarter-final win over Daryl Gurney, the 57-year-old revealed that he and Van Gerwen had exchanged words in previous meetings.

Taylor claimed: “Me and Michael had words before; he said listen you’re taking the mickey. I said course I’m going to do it back, no it’s not taking the mickey. I’m giving you back what you give me, because he does it on me, he throws his arms about and all that business, he doesn’t like it when they give it you back. Tough!”

Back in July, Taylor thrashed Van Gerwen 16-6 in the World Matchplay quarter-finals and he also had some harsh words for the Dutchman on that occasion. He told him to ‘grow up’ after claims emerged that MvG was texting Vincent van der Voort during the break of his second-round clash against Simon Whitlock.

Van Gerwen exacted revenge for his painful Winter Gardens defeat with an imperious display in Wolverhampton, yet the question remains, will ‘The Green Machine’ and Taylor lock horns for a final time at next month’s World Championship, as ‘The Power’ prepares to bid his final farewell at the Alexandra Palace?