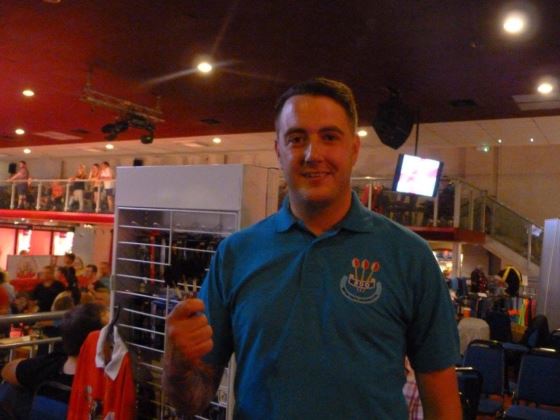 Hello Everyone
I’m Kirsty and most of you will know my husband Dave Parletti as a friend, family member, your friendly local postman around SW14 for the Royal mail, as a BDO darts player and most importantly the father to our two young children.

At the weekend he was at the Bdo Prague Darts open 2017 when he began to feel unwell. His condition continued to deteriorate so he decided to try to get an earlier flight home and with the help of our friend and fellow darts player Kirsty they made their way to the airport. He was in no fit state to fly so they administered first aid and called an ambulance. (Which I am truly grateful for as he most likely would not be here now).

At the hospital they with very efficient once he received the scan he was immediately prepared for surgery and even though there was a language barrier we were informed at this point it was life-threatening.
Dave’s appendix had already ruptured causing toxins to leak into his body and a large abscess on his stomach which had to be drained. So they were unable to perform keyhole surgery which could of meant he may have been able to returned to the UK in a few days. So the prognosis of coming home no stands at minimum of a week (fingers crossed no longer).

Darts Kirsty did an amazing job of ensuring my husband was safe and recovering from surgery but at this point due to work commitments she had to arrange alternative travel to get home as her plane had left the night before.

He is now recovering alone in a hospital in Prague without his friends and family around him. He also does not speak Czech so when he is awake sometimes feels very isolated. I am however doing everything I can at this end to make sure he does not have to think about anything financially and focus on him self getting better. I’m also reassuring him his children are doing okay even though we are unable to video chat/ speak to him at this point due to a tube collecting bile and icky stuff from his stomach but sending him lots of video messages that you can watch when he is able to.
For people who do not know him personally my husband is a very hard-working man who work 6 days a week for the Royal mail. When he is not he is following his true passion playing darts for his local Surrey super league and also a county player for Surrey travelling up and down the country on a regular basis. He has also had the honour to play for England at international level and currently the title holder of the Jersey classic 2017.

People who are not familiar with darts this is not a sport you can make a lot of money from at this level. You still have to do a normal job to pay rent and put food on the table. David is an amazing father to our children he is their hero and only wants to provide the best life possible for them. This is why we have made the decision to focus more on his Darts to one-day give us the life where we could own a property maybe? and show our children dreams can come true with hard work and dedication. He has sacrificed a lot like socialising with his best friends, no family holidays, weekends away, date nights and the list could go on as I’m sure you darts player reading this can relate. We never have anything left at the end of the month to save or to treat ourselves.

During these events we realised also we had forgotten to update his holiday insurance and his E1 11 or EHIC as it is now known had run out in June. Even though nothing could be done about the holiday insurance I renewed his E1 11 immediately and I’ve now managed to get them to give him a provisional replacement certificate so some of his medical expenses will be covered under that.

Could I please ask you to donate a couple of pounds to help with any extra costs occurring at this time. We are not sure of the final amount this will cost us financially it may turn out not to be the big scary number like we originally thought. I would like to go out there, spend some time with him and help him return to the UK. For him to not panic financially about rushing back to work. Most importantly our children want their Daddy to be home and feeling better for Christmas. Also I would like to reimburse Darts Kirsty for the additional costs she incurred in staying with him. After all we have her to thank for him still being here today.

Even if you are unable to donate please spread the word and thank you so much from the bottom of my heart. It has been it has and still is an emotional rollercoaster for us all, to think of what could have been the outcome. I will update any further news I hear and please keep your finger and toes crossed for us that he gets to come home and make a speedy recovery, so he can continue with his passion of one day becoming a professional darts player.