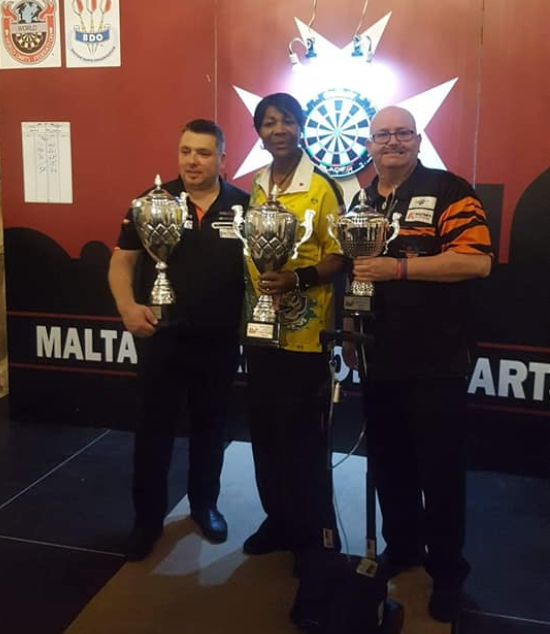 The 31st edition of the Malta International Darts Open came to an end last Thursday with top quality darts witnessed throughout the 3-day event. 256 men, 51 ladies and 6 players in the disability competition participated in the singles competition with another 137 pairs in the doubles competition for a total of 450 entries.

In the men’s singles the competition the final was contested between the 2012 PDC World Championship finalist, Andy Hamilton and 3-time Malta Open Champion, John Michael of Greece with the later coming out on top in a 6-3 victory to claim the prestigious trophy for the fourth time in his career. The best performance for a local player came from Tony Demanuele who was eliminated at the last 16 stages by Spanish player Jose Augusto Oliveria Sousa. Norbert Attard, Kirsten Aquilina and John Ciantar lost a round earlier at the last 32 stages.

In the ladies’ singles competition the honour went to number one seed Deta Hedman who claimed this title for the second consecutive year. In the final she defeated number two seed Julie Thompson 4-0. A mention must surely go to local player Althea Ciantar who managed to reach the quarter final at her first appearance at the open. Josianne Caruana was eliminated a round earlier in the competition.

In the pairs competition, the men’s title went to the Spanish pair of Barbero & Sousa who comfortably defeated Read & Lamb 4-1 in the final. The best local performance came from father and son Albert & Enrico Scerri and Tony Borg & Godfrey Abela who both were knock-out at the quarter final stage. The ladies’ pairs title was won by the English pair of Perrin & King who played exceptionally well all week with a top performance in the final against Greek player Margeta Chatzi and Andreaa Brad of Romania.

Finally, for the first time ever a disability event was played during the Open with Tony “the tiger” Pass claiming the first ever title as he defeated Miklos Joszef of Hungary 3-2 in the final. On behalf of the association we would like to thank CRPD for sponsoring this event and we are sure that in the coming years this event will continue to feature and grow during the Open.