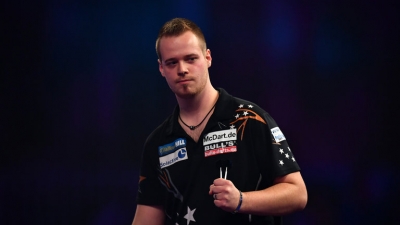 Top seed Gary Anderson will play leading home star Max Hopp in the first round of the 2017 German Darts Masters.

Scottish star Anderson, who has won the World Series events in Dubai and Perth this year, will come up against former world youth champion Hopp in a tasty first round tussle on Friday, October 20, while Kyle Anderson and Mensur Suljovic will clash at the Castello Arena in Dusseldorf.

The top eight players in the World Series of Darts Order of Merit qualified to compete in the tournament, alongside invited players Hopp, Martin Schindler and Suljovic and five German Superleague qualifiers.

Berlin-based youngster Schindler, who has made his breakthrough this year, will take on reigning world champion Michael van Gerwen, who won the events in Shanghai and Las Vegas in July.

August’s Auckland Darts Masters winner Kyle Anderson will take on September’s Champions League of Darts winner Mensur Suljovic in an encounter between players who have won their maiden televised titles this year.

Just over a month to go until the Grand Slam of Darts where the best of the PDC compete against the best of the BDO – the action from the Wolverhampton Civic Hall gets underway on Saturday, November 11 with a double session.